A STORY FOR THE GIRLS
My first contact with chronic cystitis was about 2 years ago in the office of mr. Georgiadis . Having been diagnosed with chlamydia through vaginal fluid cultivation, in terms of a first control after a short period of trying to get pregnant without success, a friend of us urged us to do a standard test to make sure that everything was normal.
The existence of the microbe that caused the inflammation of chronic cystitis and vaginitis, as we were informed with my husband by Mr. Georgiadis, besides being an inhibiting factor for a successful pregnancy, is also a source of problems for the female and male body, especially in the urogenital region. During a visit to the clinic for the treatment that my husband followed, while discussing with mr.’s Georgiadis assistant, I realized that the numerous visits in the toilet on a daily basis were not normal, so I planned an appointment with him in order to clarify the situation. Thus, using the cystoscopy method, the doctor diagnosed, and explained to me that an inflammation had been created in my bladder, causing irritation, constant sense of urination urgency and in my case vaginal dryness and pain during the intercourse because of its location. I felt strange hearing all this, as we were talking about symptoms I had perceived myself and reported occasionally to my gynecologist, who kept on reassuring me by saying that it may be fungi or an effect of the contraceptive pills that I had previously taken, and despite all treatments I was given at times they kept on persisting. After all these i stopped paying attention since I felt crazy and that I see ghosts where they do not exist. And there was a doctor finally found, telling me I was right and that there was a problem, a problem caused by a microbe that somebody else did not bother looking about. So we begun our treatment with mr. Georgiadis, by taking oral antibiotics, combined with intravesical injections of medicines for a more effective treatment of the inflammation and intravaginal ointments for the confrontation of the microbe in the vaginal region in the most effective manner. There were many people telling me that what i was doing was exaggerating and that I did not need such a treatment, but in periods of three months, through the tests we did to examine the present condition the progress was evident, not only the inflammation was decreasing but also the microbe was not any longer detected in the repetitive crops that took place. And finally came the time when we succeeded, the inflammation had decreased, the rate of my urination had been normalized in 3-4 times a day instead of 10-12 that used to be in the past regardless of the amount of liquids I used to consume, the discomfort I felt in the kidneys, that I once thought were caused by aches on my back, had ceased to exist, and that I no longer had vaginal discomfort during the intercourse. I definitely had a hard time, and a lot of suffering, physically but mostly psychologically, but the doctor with his behaviour, sometimes more severe but always explanatory and understanding had made a miracle, and now I am healthy and ready to try to have a baby.

We thank from the bottom of our hearts the doctor urologist mr. Georgiadis for his vital contribution in our effort. 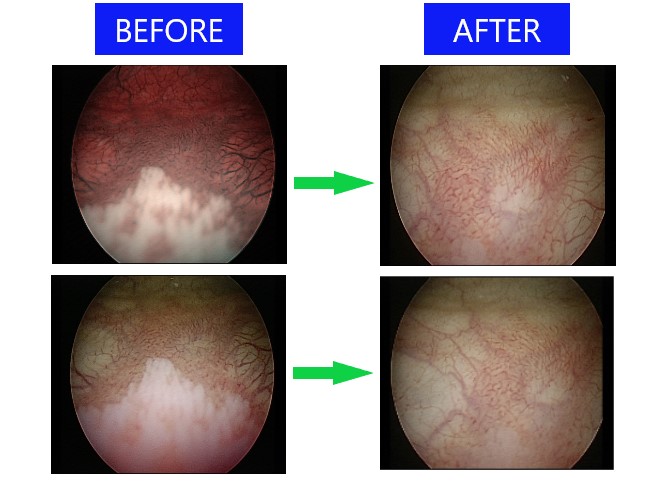 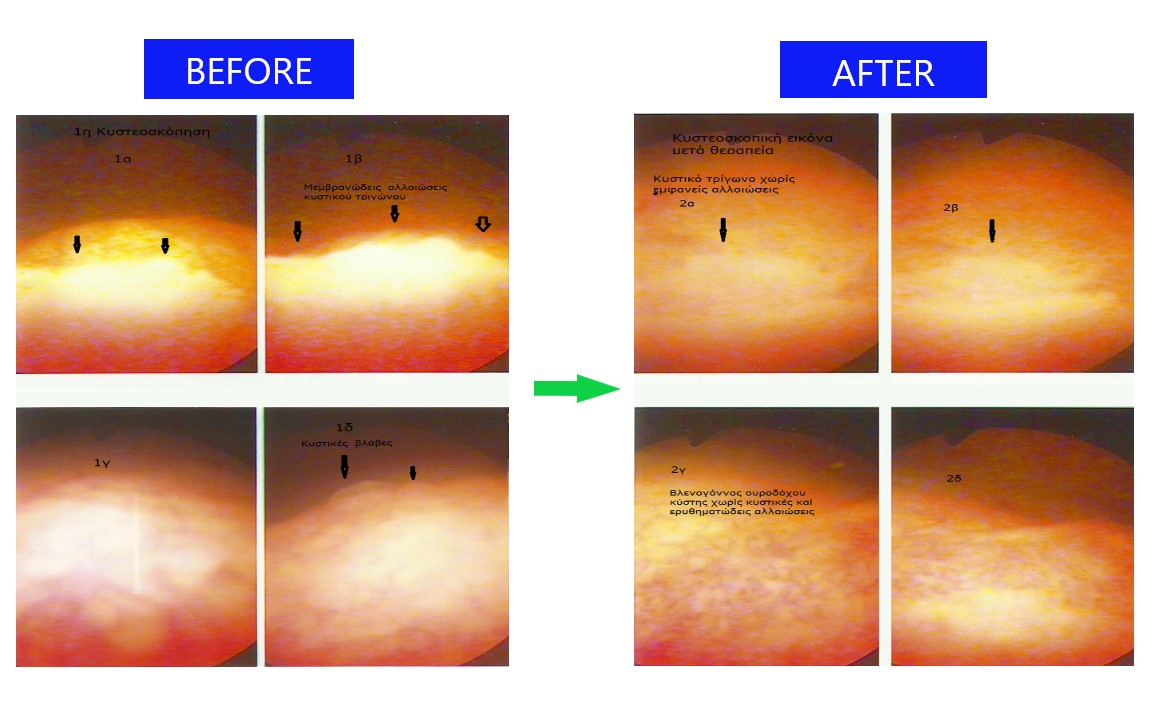 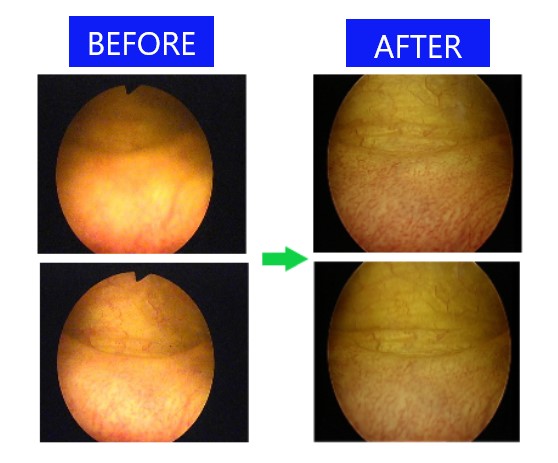 My adventure started back in 2004 with the first urinary tract infection. It had the common symptopms, smarts at the end of the urination with a little blood, ache in the right kidney and fever from 37 to 39.9. At the public hospital I was prescribed AUGMENTIN 500gr which I took for a month and a half. The symptoms receded and the doctor’s advice since I had no microbe found, was to drink a lot of water and try not to hold my urine. In the next relapse with smarting after a year, I took again AUGMENTIN 500gr. The situation was slightly improved from the moment I started drinking water like crazy!!!! After the intercourse with my husband I had burning sensation and sometimes frequent urination that I thought was because of the big amount of water. In 2009 we started trying to have a child but with no success. In 2010 I had the next big relapse with blood in the urination and intense pain in the bladder. I was hospitalized in a private clinic with intravenous antibiotics and a stay of five days. I ALSO got AYGMENTIN 1000gr for two weeks. The discomfort reappeared after 2 months with negative crops and ultrasounds that showed sand in the kidney, and had the classic advice for drinking a lot of bottled water low in sodium. At the same time we were looking for the issue of having a child with my own and my husband’s man urethral swab microbiological tests, until semen crops finally showed chlamydia.I had with my turn tissue period crops in a large private obstetric clinic with negative results. From showing the tests to two gynecologists we got answers that clearly revealed their ignorance by the first suggesting antibiotics for 15 days and the other saying that he did not trust that sperm culture center and that there should have been also done an antibiogram for this specific microbe. We had antibiotics taken again and we kept on trying on having a baby. In a center of assisted conception they told us that from the moment I did not have the microbe but only my husband, there was no reason for the delay and that we should try with the method of insemination since the sperm would be cleaned. OUR EFFORT was of course a failure !!!!!! After a lot of visits to a lot of professor urologists without unfortunately the slightest result, we sought our luck in the INTERNET. In 2012 we came to the Urologist mr. GEORGADIS who had a complete evaluation of us, clinically diagnosed our problem and we were sent to mrs. ANTONOPOULOU to have all the examinations necessary under special conditions of reception for each of us. The results showed chlamydia to both of us. There was a special test of my bladder with cystoscopy, when the Doctor reported that I had chronic membranous trigonitis- cystitis and started a specialized treatment with intravesical injections while taking oral antibiotics. After the first week the symptoms disappeared as well the nocturia (urination during the night). After about 2 years of treatment, I was completely free from chlamydia, while the deterioration in my bladder had significantly decreased, remaining only to a minimal percentage. The tolerability of this small persistent lesion led us to a small operation of electrocautery of the injury. Finally there were 3 injections with simultaneous oral medication for precautionary reasons. I would like to thank from the bottom of my heart, Mister Pavlos Georgiadis who saved us from this scourge of chlamydia and stood as a human and as a father to us in the difficult moments !!!!!! Also from the perspective of the woman who is waiting to be a mommy, I urge you to have patience and perseverance during the treatment !!!!!!! Don’t be intimidated for any reason!!!!! The doctor is an expert and a therapist not only for urogenital infections of men such as chronic prostatitis (from this infection he also healed my husband), but as we saw both to me personally and to many other women who frequented the clinic his is the expert in infections of both the urinary and genital system in women and he faces everything organized and overall because from what we both learnt, microbes are being carried by the bladder in the vagina but also the other way from the vagina to the bladder and even the endometrium is often contaminated.
G. T.